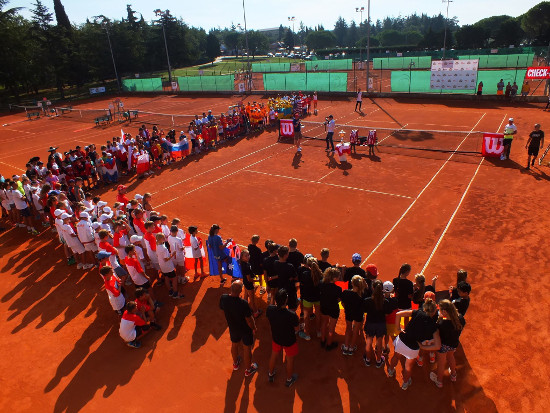 UMAG, CROATIA. Almost 220 players from 27 countries including Australia, Nigeria, United States, Mexico and many European countries met in the Final Tournament at the Umag Tennis Academy in Croatia.

Youngsters competed in eight categories (U9 – U16), both boys and girls and in four categories in doubles (U10, U12, U14, U16) as well. „Welcome to the tournament, give your best and see you at the end of the week with the smiles on your faces,“ said co-organizer Andrej Drinka at the opening ceremony.

The quality of the participants increased by the words of the organizers. „They must usually pass the qualification rounds in their home organizing countries and the finalists are invited to the Finals where the new Champions are raised,“ says Boris Monsberger, co-organizer. Main attraction is the Team Trophy, that goes to the best team with six best single results in the tournament. Fourth edition of Champions Bowl was mastered by the Spanish team. Spain became the first country with two Champions Bowl Team Trophy wins. Fair Play trophy was earned by the team of Mexico. This years honorary trophy - Positive Energy trophy goes to Temi Nzewi from Nigeria, who predicts Champions Bowl to became one of the best Pro Junior tennis events in the future.

There was an excellent level of services prepared for the teams or single players that participated in the tournament including all-inclusive standard and well-prepared 25 tennis courts. The whole week was accompanied by many activities on and off the tennis courts as well as Wilson Challenge, Tie-Break tournament, workshops for players, coaches and parents or players favourite "Players Party", in which Spanish team dominated as well and beat their competitors.