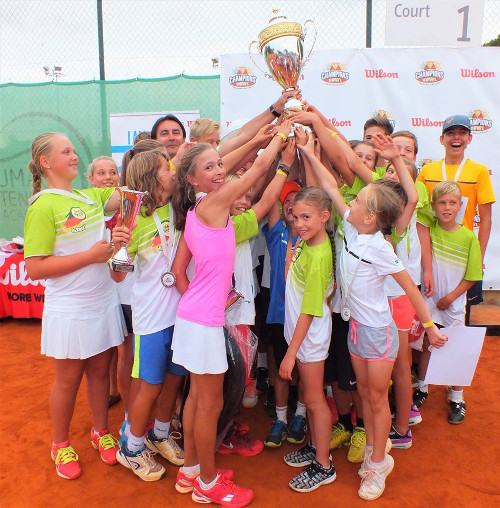 UMAG, CROATIA – The World Finals of the Champions Bowl tennis tournament this year was held in Umag, Croatia and the venue proved to be a great hit with players, parents and organisers alike. After a week of intense competition, the prestigious Team Trophy was won by Germany, with defending champions Spain edged out by the narrowest of margins.

Almost 200 players - winners, finalists and wild cards from 30 different nations - competed in fifteen singles events categorised by age, from 9 to 16. To become champions of their age, players had to qualify from a group stage and then win through a knock-out stage.

Every player enjoyed the opportunity to play many matches, with the busy week of tennis also including eight age categories of doubles competition.

Singles winners received generous prizes from the main sponsors Wilson as well as from European Tennis Base in Salzburg (Austria), Good to Great Tennis Academy in Stockholm (Sweden) - and from Istraturist itself.

There were many off-court activities to enjoy including a players’ party, gala dinner and lectures. For the adults meanwhile, there was a FUN tie-break competition which was also a big success.

“Players and supporters enjoyed great hospitality in Umag. It seems like we have found a place we can call home for many years to come” says one of the founders of Champions Bowl, Boris Monsberger.

“Everything worked perfectly: from the staff and facilities at Hotel Sol Aurora and Umag Tennis Academy to the management of Istraturist. Maybe the weather could have been a little better (and we will work on that!:). We want to thank all our partners. Hopefully together we can build on this success and our aim is to make this tournament better and better with every passing year. I am already looking forward to the next edition of the Champions Bowl in 2018, to new teams and new players”.

The Team Trophy will now stay in Germany until the next World Finals tournament. The date has already been announced for September 9th -16th of 2018.